a month ago by Jowana Bueser — 6 min read

This year marked the return of the Cinemalaya experience we know. With an interesting lineup of full-length features (and uh...not recycled shorts), the festival opened its doors to patrons who quite literally had to weather monsoons to, finally, once again watch Cinemalaya films in theaters.

Carrying a tagline that feels apt as it is fresh — "Breaking Through the Noise" — the 2022 Cinemalaya Independent Film Festival is the country's first touchdown on the festival culture in years.

Unreel's contributing writer, Jowana, watched all twelve entries; after the bump, she shares her unfettered thoughts on the new films.

Did I just watch a Filipino film about a 40-something pregnant single woman who cannot decide on pushing through with abortion because of her maternal guilt and conflicting feminist beliefs? I did.

While the rest of the cast is exceptional (Bing Pimentel and Claudia Enriquez, in particular), this film is about Max Eigenmann and her character. She has a knack for cornering messy, complicated characters throughout her career — this is the messiest and most complicated yet. What the film does well is showing the fears, furies, and frustrations of a smart and independent woman in utter chaos.

Three friends “reunite” after one of them, a communist rebel (the always reliable Meryl Soriano), gets killed in an encounter. Joem Bascon plays a driver/messenger who was asked to retrieve the body of Soriano, his former flame, in the mountains. Benjamin Alves, their other friend who now works in the city, introduced her to the communist struggle.

Angkas works better as a reunion film where the three friends patch things up and accept their differences. However, it becomes a bit didactic whenever the characters debate their ideologies.

Janine Gutierrez and JC De Vera star as a deaf and mute couple struggling to repair their broken relationship. The story progresses in reverse, beginning with the couple's breakup and ends with their first meeting. While it gets confusing whether a scene is a flashback or set in the present timeline, this decision is still an interesting narrative choice.

That said, I am still wondering if the story would have been better from the point of view of Janine’s character. Rarely do we see a bold and independent-thinking disabled character onscreen. That she is also a mother and a wife who is earning more than her conservative husband makes her an even more complex character.

Young actors Tommy Alejandrino and JM San Jose are the heart and soul of one of the better entries of the festival. The baseball player in question is Amir (Alejandrino), a goodhearted kid, a model student, and a rebel trainee. He dreams of becoming a baseball player to escape his inevitable future as a soldier of a rebel group in Mindanao. Khalid (San Jose) is a war orphan adopted by Amir’s mother.

The film ascends whenever it focuses on Amir and Khalid's relationship; the lead actors' chemistry is a joy to watch. The Baseball Player finds fleeting happiness amid tragedy and reminds us that what war ultimately destroys is hope.

Clocking at a little more than an hour, Batsoy is the shortest of the eleven entries. Set during the Martial Law years, it tells the adventure of two brothers as they meet different people while selling firewood.

There is an attempt to inject magical realism into what could have been a mundane slice of life. The younger brother has an active imagination and sees enchantresses while hiding from rebels or mermaids while working on a seaweed farm. I wish the film made the fantastical elements more substantial to the story.

Elijah Canlas leads a talented cast of young actors in this highly entertaining (probably the most technically polished) entry. A police checkpoint netted a rising band after committing minor traffic violations. What follows is a night of terror in the hands of an unscrupulous police chief (Soliman Cruz).

There are moments ripped from the headlines throughout the film. (Ricardo Cepeda makes a delicious impression of a real-life police general.) However, I am a bit unsure with the framing of the drug war from the point of view of privileged kids is the best way to discuss the banner program of the previous administration. The war on drugs disproportionately targeted the poor and powerless, not the rich and powerful.

I found the film confusing in what it was trying to say. It seems like an anti-war film but pro-soldier at the same time. I am uncertain if we can truly protest a war without criticizing militarism.

That said, there is a particular scene where the film comes alive. During a spirited conversation, a relative (a supporter of a certain president) launches into an Islamophobic tirade. Exasperated, the girlfriend of the soldier gloriously dunks on the keyboard warrior.

There is a good story about the effects of social media disinformation somewhere in this film, and that would have been more interesting.

Ruby Ruiz is an exemplary performer. She is onscreen for about half the running time and still stole the entire film.

The film follows two brothers' dream of making it big in the crowded boxing scene. Traumatized after the death of her eldest, the mother stopped her youngest son from continuing his burgeoning career. But the fear of mounting debts is too strong to ignore, so he accepted the invitation of a shady promoter to join his stable of prizefighters. I must laud how the film captured the palpable machismo of training camps — one can see, feel, and smell the sexism and violence.

Like most sports-based films, Ginhawa is a bit predictable. We have seen countless iterations of the dangers of greed, and the film does not add anything new to the discussion.

The stressed-out mother is a staple of the horror genre. Add Rebekah (Coleen Garcia) to the long list. While in the middle of a messy custody battle with her estranged husband, she receives a lucrative job promotion abroad. And so begins her "We spend most of the time wondering if everything she experiences is real or imagined" run-through until it all turns into a momentous bloodbath.

While not all mothers are good, I do not think Rebekah deserves her murderous transformation. What does it say about a society that equates complicated mothers to monsters?

Max Eigenmann plays a delivery truck driver assigned to transport bamboo to typhoon survivors in Guimaras. Despite the risks, she took the job because the man whom she believes is responsible for the death of her husband and daughter happens to live in the same province.

Kargo shows the vulnerabilities of women during personal tragedies and natural disasters. In the hands of Eigenmann, the character becomes a tapestry of anger and sadness. I wished I could hold on to the ending but alas.

Azon (Peewee O’Hara) finds herself struggling to adjust to life after retirement. Staying at home does not come easy to someone who has worked actively for years. One day, an acquaintance invites her to a bingo game, which she accepts out of curiosity. What started as a welcome distraction turned into a destructive vice.

Retirada is a simple story stretched to its limits. There are too many repetitive scenes where nothing happens. The film ultimately feels like a missed opportunity to discuss its subject, considering the various congressional bills currently filed regarding retirement and pensions. 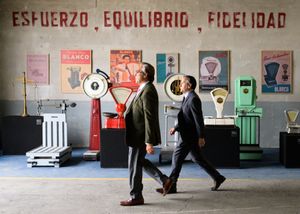 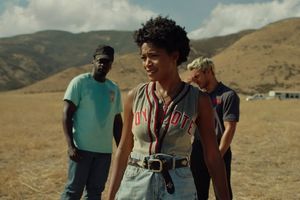